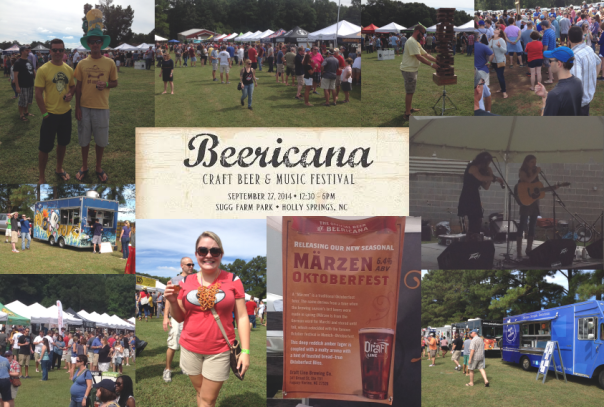 Beericana, a craft beer, food and music celebration was held on September 27th on the grounds of Sugg Farm Park in Holly Springs. Belle and I attended to report on the event, which was well organized, and well attended. The weather for the event couldn’t have been better – cool and dry – a perfect autumn day.

We arrived 30 minutes before general admission ticket holders were permitted to enter, but it seemed VIP ticket holders had taken advantage of a good head start. Laid out in a triangular formation with venders towards the edges, attendees had the middle portion to set up lawn chairs and base camps of friends and acquaintances. Surrounded by over 100 beer taps, provided by nearly 50 craft breweries, not to mention a wide assortment of food trucks, a full-on assault for a good time was anticipated. When we entered the gate we received a Beericanna sampling glass, and the cost of admission included unlimited sampling from all the brew venders.

Belle was the designated driver, which left me to set out to sample some of the finely crafted brews exhibited. It was up to me to take-one-for-team-TSE. Something that caught my attention was the fact that several of the exhibitors had crafted a beer bearing the style, Märzen, which is common for Oktoberfest. It is dark, rich and satisfying. Since I am not a fan of the more common IPAs, I found this style more to my liking, and sampled several from, Gordon Biersch Brewing Company and Draft Line Brewing Company. I also sampled an excellent German Pilsner they called ‘Polished Pilsner’ from Bombshell Brewing, who calls Holly Spring’s home.

While Bad Boy was graciously “taking one for the team”, I decided to do a little people watching and talking with others. We had set up our chairs near a tumble tower (oversized version of Jenga) and cornhole boards. These games were provided by 13 Degree Games for the attendees to enjoy. I watched several people try their hand at the tumble tower as their friends gave guidance and encouragement. Most ended up restacking the blocks after the tumble! While I was watching the happenings at the tumble tower, a new friend and I got to talk about Nascar, “The Chase”, and our favorite drivers.

One of the interesting things I noticed was many of the participants were wearing pretzel necklaces and I just had to know all about these necklaces. So I asked one of the ladies who had one of the more interesting necklaces. Kori explained the necklaces were worn at beer festivals so you would have a pretzel to eat between tastings to cleanse your palate. I am already looking forward to designing my pretzel necklace for next year’s Beericana (I just know it’s going to become an annual event). There was also a man wearing a very tall bright yellow and green hat that caught my eye. I asked if he would tell me about the hat and he explained he had been wearing it to beer festivals for the last ten year and it had just become a tradition for him. If that hat could talk, can you image the tales it could tell!

After sampling finely crafted beer, Belle and I turned our attention to sampling some food. Of the food trucks attending, the only one we hadn’t sampled previously was Kokyu. Their specialty is sliders, a popular food group among beer drinkers – am I right! I choose two selections; one from their regular menu, Carolina Carnitas Sliders, and another from their event specials, Reuben’s Cuban.

The Carolina Carnitas has a vinegary pork, with avocado, cilantro and sesame. The combined savory/spicy, along with the creamy avocado, created an unexpected, yet delightful flavor. The Ruben’s Cuban had rosemary grilled pork, cheddar, and quick pickles. The thin-sliced pickles provided a taste was as good as the presentation, and a good balance to the beer I had been sampling earlier.

Bluegrass Music was also provided for everyone’s enjoyment. While we were there, the duo of Lynda Dawson & Pattie Hopkins were on stage with their acoustical instruments and haunting ballads about North Carolina.

Belle insisted we need to take “a little something home” to enjoy later. So our last stop before leaving was at the Not Just Icing for a six pack of cupcakes.