How it works: Paying guests get to sample each course in a blind tasting alongside a panel of culinary and celebrity judges in a series of 15 dinner competitions hosted in the four regions of the state. Each evening, two restaurants “battle” it out side-by-side in a single elimination format. Guests savor a six-course menu (three dishes from each chef without knowing whose food they’re tasting) created around a “secret” ingredient. For almost all series, the secret ingredient will come from a North Carolina source. The secret ingredient is revealed to the chefs only an hour before they start cooking and it must be used in each of their three courses Diners, alongside culinary and guest judges, will rate each dish and determine who moves to the next round and who goes home. Semi-Final Round – both chefs had competed and won in the first round of competition.

Contestants: Chef Christopher Hill of Faire and Chef Ryan Conklin CEC from Rex Healthcare At stake is a grand prize of $2,500 and a coveted red chef jacket.

Location: Fire in the Triangle takes place in Raleigh, at 1705 Prime, E Millbrook.

Our egg farmers are located all over the state from Dare County to Cherokee County. We have approximately 9 million birds which lay about 7 ½ million eggs a day. That is about one bird per person North Carolina. And since the average person eats about 255 eggs per year, we produce enough eggs to feed our residents. Hens lay an egg about once every 26 hours and usually skip a day in the week.

A sunchoke is a tuber, like a potato, and is often prepared and eaten as a root vegetable. Light brown and bumpy on the outside and white inside, the sunchoke looks somewhat like a small potato or ginger root. It is native to North America and was cultivated by Native Americans prior to the arrival of European settlers. Also called a Jerusalem artichoke, its name can be a source of confusion because the plant is not closely related to the artichoke; rather, it is a member of the same flower family as the sunflower. With a nutty, somewhat sweet flavor, many cooks enjoy adding bits of the crunchy, raw vegetable to salads or salsas, while others prefer them roasted or mashed.

Topo Distillery, LoneRider Brewery and the North Carolina Beer Guys supplied drinks. I loved my spicy Bloody Mary again last night. While we were waiting a basket of bread supplied by La Farm Bakery was placed on our table. Ymm! Belle enjoyed her Shotgun Betty Hefeweizen.

Table 13, a change from my favorite table #4, consisted Linda Barnes, Belle of Triangle Street Eats, Lisa and Jeff, Katey and Matt, John and his date, Christy and Cole and myself. Everyone was excited to be at the dinner. Lisa and Jeff had attended the competition with cocoa nibs. Katey and Matt recently had a baby girl, and were on a date celebrating their anniversary (wink wink) and Linda was celebrating her birthday. They received glasses from Libbey.

The winner was Chef Ryan Conklin CEC of Rex Healthcare with a score of 28.14 over Chef Christopher Hill with a score of 24.47. It was a battle to the end, who both chefs preparing an outstanding culinary experience, Conklin’s Chocolate Ice cream was the winning course that pushed his score over the top.

The final battle will be between Chef Ryan Conklin of Rex Healthcare and Curt Shelvey of Curts Cucina on March 9. It will be a great competition between two great competitors!

Until next time – The Traveler

Belle and I had originally planned to go to the Western Wake Farmer’s Market and Craft Fair, but due to the cold, rainy weather we decided we would start our day of adventure later. I needed to run some errands and arrived to Belle’s around 1 pm. We contacted Uber, since parking can be difficult and there were other events going on downtown.   We like the fact that Uber drops us off at the Duke Energy Center.

The Belle and I attended a wonderful comedy, called Men are From Mars and Women are From Venus. Neither of us had known what to expect, but were familiar with the book written by John Gray. When the lights came on, we were delighted by the comedy of Peter Story, who had ironically debuted the original play in February 2013 in Raleigh. Peter Story covered everything from dating and marriage to the bedroom in a hilarious manner. The laughter from the audience never stopped. I was not familiar with this energetic, talented standup comedian so I looked him up to see what else he had starred in. I found that Story had appeared on CSI, Without a Trace, Ugly Betty and recurring roles on The Tonight Show and Rob Lowe’s The Lyon’s Den.

The Friends were excited about the opening of another restaurant by the Eschelon Hospitality Group called Faire, located at Cameron Village in Raleigh. Faire boasted an unprecedented dining experience, stating their “land and sea” menu was anything but standard; taking classic American favorites, and giving them an updated, locally inspired spin.   It was indeed an unprecedented dining experience; one that the Friends will not repeat.

We do reviews of various eating experiences to promote locally owned business, because we feel it was important to support businesses in our community. We do it because of our unique backgrounds and our love of food. We give an honest critique of eating establishments and take no pleasure when we give a bad review, which is based on our dining experience. We did discuss problems with the manager, since we realized the restaurant had only been open for two-weeks, but we felt like our issues were not taken seriously. 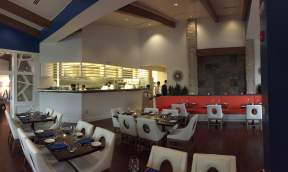 We called for a reservation for 6:30 and were told there were no reservations available, but we could come at 5 or 5:30. We drove to the restaurant and looked for parking since there was no valet parking available. We drove around the block twice and finally parked in the bank parking lot across the street. The parking for the restaurant was not well marked. The atmosphere in Faire is best described as aloof. The waitress would engage if spoken to, but otherwise was non-conversant. She gave good service otherwise.

We decided to get two appetizers to share, the pork belly and Fruits de Mer: which consisted of chilled oysters, shrimp, jumbo lump crab, smoked mussels, lemon, horseradish and spicy carrot “ketchup”. Though the pork belly was good, the ‘Fruits de Mer’ was a different story. The oyster lacked any liquor in the half shell, the shrimp were medium sized, the mussels were okay, but the crabmeat was bad. It should have never been served. There was no way the person preparing the Fruits de Mer didn’t know that the crabmeat had passed-its-prime. It smelled and tasted fishy.

e told the waitress and the manager, Jamie Greaves, who came to our table and inquired what was wrong. We told him the crab was bad. He argued, stating the crab was fresh. The bad crab was removed and replaced with three oysters at our request. Next came our entries. Belle ordered the rib eye steak, medium well with the truffle fries. Bad Boy had the swordfish with Brussel sprouts. I selected the bison steak with Au Poivre cracked black pepper crust, brandy, Dijon gravy and mashed potatoes. The side dishes were large enough to share with the entire table. The waitress should have made this clear. The food was lukewarm when it arrived to our table and cooled off quickly.

The Bad Boy was satisfied with his swordfish and Brussel sprouts. Belle felt her rib eye was not a high-end quality cut and her truffle fries were cold and limp, lacking in the truffle taste. My entrée, the bison was over cooked and tough. The mashed potatoes were average along with the gravy. Overall we rated the entries as 5 out of 10 and the appetizers 1 out of 10. The best offering for the day was the Amuse consisting of duck confit with beet oil and micro-greens

We were still hungry so ordered dessert from the very limited menu. We selected the Peanut Butter Mousse Cake. The cake was good; the ice cream crumbled which indicated it was over frozen and the spicy peanuts did not belong on the dish.

We came to the restaurant with high expectations and left deflated. We had taken the time after eating to speak with the manager about our concerns. He seemed indifferent to any of them and suggested we return in three months time to evaluate the restaurant again. A restaurant with the provenance of one affiliated with Eschelon Experiences shouldn’t take three months, let alone three days, to work out minor kinks in staffing and suppliers. Dining should not be a dress rehearsal for staff on unsuspecting customers! It was obvious that the customer is not valued. Additionally at the front station, the wait staff would congregate and talk. We found this to be very disturbing. We did discuss this with the manager, but what could he say, since he was just as guilty of congregating in this location as the wait staff.

We asked the table next to us if they had enjoyed their meal and they had readily said yes. They had the swordfish. However based on our experience, we will not be returning or recommending others go to Faire, unless they order the Swordfish. – Traveler